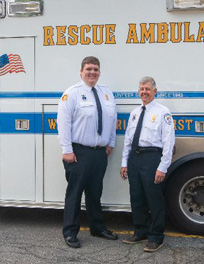 On July 26th, at 10:06 a.m., Wayne First Aid Squad members Rob LaMin and David Pudup responded to an ambulance request on Nellis Drive. Little did they know at the time, but they had just reached a milestone for the Squad – they responded to the Squad’s 200,000th call. The Squad is an all-volunteer organization. It was founded in 1943 and its members responded to 40 ambulance requests its first year. Now the Squad responds to an average of 5,000+ calls annually. The Squad’s first vehicle was a recycled hearse, now the Squad has 5 rescue ambulances, a rescue truck, an ambulance bus, and an ASAP (miniature 4-wheel drive ambulance). Members respond from two locations in Wayne Township, on the Hamburg Turnpike and Mountainview Boulevard.

The Squad is a very diverse organization, made up of individuals of all ages and walks of life. The Squad is always looking for new members, individuals interested in giving back to their community in a valuable way. If you are interested in becoming a Squad volunteer we encouraged you to visit our membership page. A representative from the Membership Committee will respond promptly and provide information regarding membership and answer any questions.